Down at the arcade 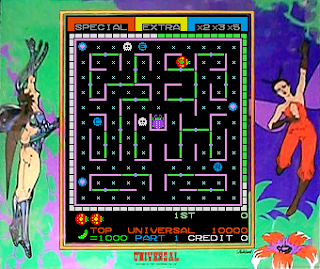 You may have noticed that Lou Reed's New Sensations was released in 1984. So me and Lou became addicted to gaming almost simultaneously. While he was singing Down at the Arcade, I was, well, down at the arcade. While he was babbling about "It's very dangerous putting money down on Robotron/Oh, I'm the Great Defender", I was playing something else. I was playing Lady Bug. Think of it - it's quite obvious, for Lou, to love amphetamine-driven games such as Robotron and Defender. Anyway, Lady Bug is the kind of game Lou would enjoy playing in his contemporary tai chi era. So, both Lou and you should try it now, thanks to this very accurate Flash conversion from the original arcade game. Yes, even if you don't give a damn about Tai Chi.
What's so good about Lady Bug? In one word: balance. It requires the player to be logic, to be quick and to be cool in equal measure. You need to control your mind, your body and your emotions at a time, and if you excess in one of them to the detriment of another one, the game punishes you with no mercy. Believe me, it's not a case that I put in the equation also the "feelings" variable - it's not just a matter of moving and/or thinking. To hold the gameplay scales even, you need to hang on to your emotions, to keep a relaxed attitude. You can't do that for long, obviously. But the fun, as in Lady Bug as in many other Japanese coin-ops of that age, is to lose balance just to regain it. Nowadays, too many games are unbalanced, one way or another. It's not just developer's fault, it's also because of the increasing control system complexity. Lady Bug requires you to use only a 4-way joystick. That's all you need to master in order to appreciate the subtlety of its game design. And without the hassle of those pushers you could find down at the arcade, for good and for bad.
I think I'm going to attend a kundalini yoga class. Whish me good luck.
Pubblicato da B.

Talking about Balancement, another coin op I find balanced is super olympics. It takes you through a series of riddles that will eventually rise in difficulty, but it's not always the same: there are different kind of games, here "sports", in wich you have to put a different characteristic of you at work. Haste in pressing buttons ofor the run, synchronization in the dish shooting, intelligence and good timing in the javelin thrown and so on. I know, it's not like if it was a single gameplay ah lady bug, but's it worth a try.
Another greatly balanced game, wich is not an arcade however, is Starcraft. The balancement of the 3 races is awesome. It landed on nintendo 64 too :)
Baddo