Before everything was made with computers 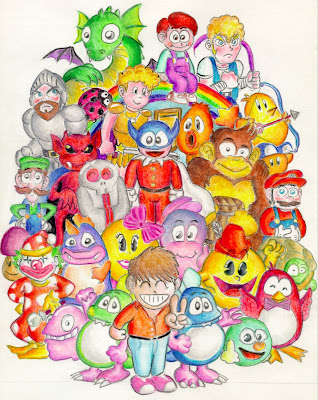 Andrea Babich, Self-Portrait with friends from the 80's,
coloured pencils, 1999
Before everything was made with computers I used to draw a lot. While PCs really helped me with music, they simply killed my drawing power. I can't explain why it happened, maybe it's just because computers ask to be creative in oh so many ways: writing emails, chatting, doing research to understand why Windows Vista is such a waste of time. To be honest I still produce lots of those compulsive drawings you make while you're at the phone. Black and white stuff, anyway. Colours are gone. Curiously, they're gone away when I started living in Milan.
This is one of the last coloured drawings I did. And I lost it too! I only have a scan. If you want that very scan you just have to click on the image. But I wouldn't do that without a thing called "broadband", which was invented because of computers, not because of coloured pecils.
I still write colourful songs. The last one is called Wahe Guru Jio, I'll post it someday.
Pubblicato da B.

I wondered a bit what were coloured pecils, then I red under the printing and I realized.

My master can do anything: writes songs, makes printings, publishes books and lives la vida loca. And gives wise advices to me too.

Can you ever imagine that I'm writing in english here just 'cause he asked me?

ok, it's a good training too, i admit.

I suspect that one answer to the "why did i stop to draw with pencils" question might be: lazyness...
...back to the drawing board you time waster!
;-)
Ras