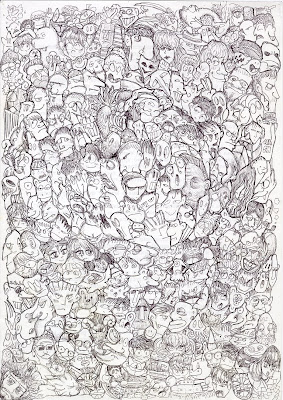 There was a Fuffa DJ Set in Trieste, at the Grip, on Saturday 17 November, hosted by my friend Gizu and Me. It was oh so nice. Honey, it was paradise. Exciting like a YouTube video eternally waiting to start.
This is the original drawing that, aptly adapted by my co-hoster, became the official flyer for that beautiful night. Which was, incidentally, Gizu's sister birthday party. And the club was full of people. So the drawing, chosen almost randomly, proved itself to be quite appropriate. If you watch closer, you'll find out that there's your face, too.
Quella notte, il vento della mia città natale mi ha regalato una canzone, sebbene io non sia ancora in grado né di ricordarla, né di cantarla.
Pubblicato da B.