The legend of the skiing game with no name, part II 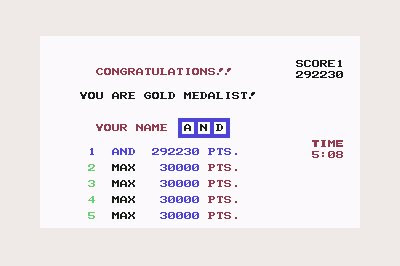 Move over, MAX: A record achieved by AND on the Skiing Game with No Name, while listening to "Judas Maccabaeus" (HWV 63), by Georg Friedrich Händel.
Hi, and welcome to the first post of the year, which could be aptly titled “Games nobody ever cared about except for me and my monkey, part II”.
In the previous post you had the chance of download the Skiing Game with No Name, one of the kings of the “forgotten games from the ‘80s” folder. So forgotten, that the developers forgot to give it a name. That’s because the game was never marketed. And it was never marketed because it was developed for a home computer which was dead almost before being born. [JAN 2011 UPDATE: Well, the game WAS marketed, after all, with the name of SLALOM. Few carts were made, it was sold only in Japan and now it's a rare collector's item]
Aww, such a sad tale, the one of the skiing game with no name! The name’s developer, on the other side, should make you shiver with anticipation: HAL Lab! The makers of Kirby! The creators of Super Smash Bros! Well, back in the Eighties they weren’t a Nintendo second party: HAL developed games for almost every home computer which was available in Japan. Not only MSX or PC88, mind you: our beloved Commodore Vic 20 and Commodore 64 were marketed in the land of the Rising Sun too. That’s why those first cartridge games you had on the Vic or on the 64 were highly playable clones of Space Invaders, Monaco GP, Rally X, Lunar Lander and so on: because they were made in Japan by a top-notch, albeit rather obscure, developer.
Talking about those C64 cartridges, there’s a further layer of suspense: they weren’t originally programmed for the Commodore 64. They were meant for the ultra-rare, Jap-only Commodore MAX Machine (aka Ultimax): a sort of cut down C64, with way less memory and a rubber keyboard. You can call it “the missing link between a 64 and a ZX Spectrum”, if you want. Nobody wanted the Max Machine in Japan, that’s for sure. At least, being the MAX Machine games compatible with the C64, those wonderful coin-op clones didn’t die with MAX, being sold by Commodore on a worldwide base instead.
Here comes the sad part: the last two games developed by HAL for Commodore never got marketed for MAX; therefore, they were never ported on the 64. One was a billiards game “inspired” by Konami’s coin-op Video Hustler; the other one was our beloved skiing game, a “copy” of (or one should say a major improvement over) Alpine Ski by Taito.
Here comes the twist which changes the sad ending in a happy one: at the beginning of 1984, the two prototype games resurfaced on pirate floppy disks thru Europe. I’d give away all my Barbapapa magazines from the ‘70s in order to know the true story behind this pirate ops, one of those cases when piracy becomes a rightful mean of dead media preservation. While working as a freelance for the Italian Official Nintendo Magazine I really hoped to arrange an interview with Satoru Iwata, at that point executive producer and CEO of HAL, only to ask him about the skiing game. Unfortunately, in a matter of months Iwata became CEO of Nintendo of Japan: an untouchable half-god descending from Amaterasu, the sun divinity, just like the Japanese Emperor.

That’s it. It’s 2008, the Skiing Game with No Name is 25 years old! Amidst all the other good propositions for 2k8, we think it’s our personal duty to celebrate this anniversary in the proper way (since, otherwise, no one else would do it). A Hi-Score contest! Prizes! Trips to Japan! The full walktrough (er, skitrough)! The mystery of a Hi-Score table which has a Georg Friedrich Händel tune as background music! The NTSC Grey Rabbit glitch!

We know very well that NO ONE is reading at this point, but now we’re very, very excited about the 25th Anniversary of the Skiing Game with No Name!