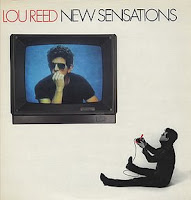 Hey Lou, take a walk on the Nintendo side.

Please, take a look at this Lou Reed video interview (it starts at 4:00, actually). Sometimes I think that the drugs don't work. Sometimes I think that the problem is not that the drugs are wrong - it's people who are wrong, because they expect something from drugs (I'm talking of every kind of drug), putting themselves in the passive role of objects, rather than in the active role of subjects. Look at the Lou Reed interview over here. Is he doing a good use of drugs? Is he really on drugs? Does he look like a fool? Or more like a wise man? Both? Lou would say "I just don't care at all" (at 1:18). And that's his bastard mighty strength.

What is not very well known is that in the early Eighties Lou became a videogame addict. He had Atari, Intellivision, and, as a arcade habitué, he held an outstanding record at "The Rolling Stones" pinball. His videogame addiction has been reported in "Transformer", a biography by Victor Bockris, for instance. You can find further proof of it in the 1984 album New Sensations: cover and bleepy sounds apart, songs like My Red Joy Stick and Down at the Arcade tell it all about how influential games could be. And what a bad influence it was: New Sensations is, in my opinion, the worst Lou Reed album.

Think of it. Lou Reed could survive heroin, but videogames could kill his inspiration so easily. I don't need to think of this scary parable to remind myself how dangerous videogames can be. But it helps.

Point one, I don't have any Idea of who the hell is Lou Reed (I think that's just because I'm 20 and I love good music - just kidding master, ya'know- )point two, your english is... well... let's just say it's like if english-speaking Italian people such you and me were writing in english. So, long-story-short, it's how it has to be. What's that all about?
1- AN arcade habituè
2- think ABOUT it (less sure about that).

After some satisfyng master-correction, and werid english writing (I remember you asking me to do it, master. "if you have to post comments, post in english". Not even a please, thanks... :D ), I'mma charging mah lazers and starting mah mule. New research - low reed. Any suggestion?

p.s. come back on the messenger - i'm changed, i swear!

Everyone has the stalker he deserves.

Do I DESERVE you the good way or the bad way? :D