The legend of the
skiing game with no name, part III 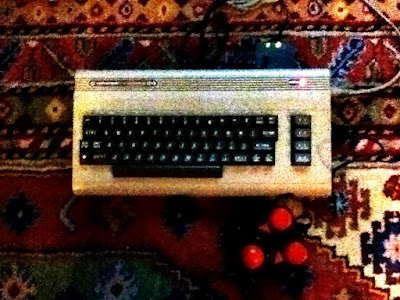 We're talking about this thing here. You have been warned.
Since people get old, blogs get old. Last time I wrote about the Skiing Game with No Name it was January 2008. Four fully full years ago. But since the Skiing Game with No Name is waay older than that, there's nothing strange about that. We're in a no-time, no-space situation. Commodore 64. That kind of mood. A glass of Stock 84, an evening with an old friend, the beloved 8-bit computer which trascends space and time, becomes pure spirit and cheers me in these cold, long and lonely winter nights.
As you can see in the upper photo, I put again one of my Commodores on the floor. Well, on the carpet, 'cause he's old, you know, and he deserves some sympathy. I have this little ossession for this old skiing game, dated 1983, signed Commodore/HAL, which I got acquainted with in, well, 1984, exclusively thanks to early software piracy. Strange stuff, great Japanese arcade action on the Commodore, if you know Commodore history you may know why, but I won't digress here. For years, I thought that this game was a beta somehow leaked and distributed on the Western market, hence the lack of a proper logo or name - but some time ago I found out that it was no prototype, only a very, very rare game, officially published only on the Japanese market, just to meet total indifference by consumers. So, um, the Game with No Name has a name, actually. 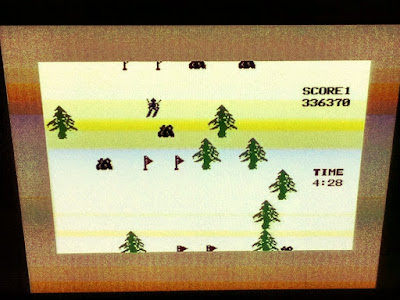 Slalom.
Yes, simply Slalom. Those were the days. Slalom.
And being so rare, it's awfully expensive. Collector's stuff. I'm not a collector. Yes, I have 4 different Commodore 64s, but it's different, it's like having several statues of the same god, in order to worship the divinity no matter what happens. And I'd like to worship Slalom too, on a dedicated pinewood shrine, but, shiver me timbers, it costs so much than collectors won't even tell me how much (more than the pinewood shrine itself).
It's trickier than that. It's not that Slalom is expensive per se. It's more like, listen son, I don't give a fikifiki about Slalom, but it's a piece of my complete Commodore cartridge collection, if I sell this useless Slalom crap to you, well, it's no more a complete collection. And I die.
So I still have to play a pirate copy of the game. On a true C64, no emulation, please, not when it comes to worship and regression. The silence of the room. The smell of the blossoming hyacint. The brandy. Those wonderful 6581 soundchip bleeps. Gosh, one of the sound channels of the soundchip is slightly off-key. Things get damaged. Things break. Like humans. Sometimes slower, sometimes faster. It's a sad thought. Proust teaches that you need to be really a wonderful moron to achieve a true regression - most of the time, you end up feeling older, not younger at all! In order to escape this bad vibe, I simply started playing the Skiing Game with a Name.
And I missed the DAMN WORLD RECORD by 2500 points! Here's my score: 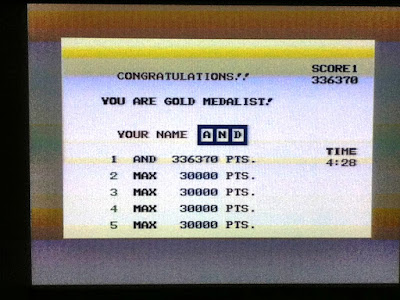 The DAMN WORLD RECORD is 338920, scored by my friend Marco Calcaterra. Maybe there's someone in Japan who had a 350000 high score, but it's undocumented and, anyway, nobody cares about this game. Heck, it almost got no name. I got a name.
Or maybe Marco has beaten his own record, in the meantime.
Alas, it's so hard to regress. 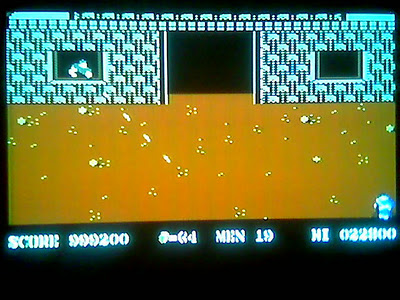 So I achieved the maximum score at Commando. Grunt.