The Science of Parody 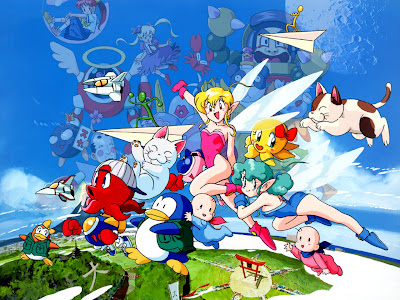 Jikkyō Oshaberi Parodius, Konami 1995
While writing another post (I'll publish it some other day), I realized that there are not many parodic games. There are satires of games done outside games (ie Penny Arcade), parodic cameos, but it's very rare to see an entirely parodic game, these days. Why? Because it's herculean task. Every kind of parody need to be funny in order to gain respect, but when you develop a game you also need to offer a gameplay that's funny. If you develop a game which has satiric dialogues and settings, but which is boring or uninteresting gameplay-wise, you're going to fail to impress, the game will feel empty, unaccomplished. Take for instance The Secret of Monkey Island: it worked great because the setting is crazy and the interaction structure is top class - simultaneously. Furthermore, while the story is a great parody of pirates, the gameplay really parodies the "point'n click" adventure genre - and contributing to the evolution of the genre at the same time! Manic Miner did something similar for platform games, some years before.
An even more enlightening example comes from the Parodius series: it deconstructs the Gradius series down to the last bit, offering solid 2D horizontal shooting dynamics, reinventing the serious sci-fi graphics of the original in a manga/super deformed/plain silly fashion, leaving the epic soundtrack for some catchy & cheesy rearrangements of classy classic classical tunes. No matter which layer of game development you consider, you'll find that the Parodius Team has poured genius, creativity, weirdness and lots of laughs in it. Never forgetting playability.
Wow. This kundalini yoga is a blast. You should really try it.
Pubblicato da B.

beautiful blog
but you should stress more on the links: in this post you let people play manic miner but no one will notice. It's a pity

Ah, the youngsters of these days are not intrested in parodys... guess why? they don't even KNOW what parodies talk about! Do you think that any f****g kid who went to see Shreck the third ever caught the parody of the death of Master Yoda in the King Harold's death scene?
Really, today games must have amazing graphics, cool ninja-cyborg-pirate-jesus characters, brown enviroments and anti aliasing. Fuck! Excuse my frenchism. I'm an angry middle-timer, i started at the age of starcraft dammit, I played Diablo series, Morrowind, Baldurs gate, Age of empires I and planescape torment. Where are the graphics?
In wich kind of kidster-game world we are living? We still figt-fighting in the eighites eighties eighties.
And let's not talk about cartoons and anime. Let's look at Hokuto no Ken and a gay-like anime of later times, like Sayuki or Inuyasha. Man, it sucks. Children rule the world. Fucking playstation.

I was very impressed by the cool ninja-cyborg-pirate-jesus character. I mean, I imagined all those wrapped into one. a pirate cyber-ninja rendition of Jesus. Wow. I'll try to draw it, someday.

Just open your mind and go over age-complex.

infact i really love one piece